Certificate Program for Diplomats on the Politics, Society, Economy and Security of Israel

Unique in the landscape of Israeli politics, the Certificate Program for Diplomats aims to provide newly arrived diplomats with all the tools necessary to hit the ground running.

This year, IDC Herzliya will once again welcome newly arrived diplomats for an intensive introduction to Israel with the Program for Diplomats – Understanding Israel: Politics, Society, Economy and Security.

This unique academic program was created by Prof. Alex Mintz, director of the Institute for Policy and Strategy and chair of the Herzliya Conference series and of the program, in cooperation with Amb. Yitzhak Eldan, former Israeli ambassador to Denmark and former chief of state protocol at the Foreign Affairs Ministry, who came up with the idea, and Amb. Henri Etoundi Essomba, the ambassador of Cameroon and clean of the Diplomatic Corps in Israel, who has warmly endorsed the program.

Open to all recently arrived high-ranking diplomats, the program aims to assist them in facing the challenges of understanding a new country, and, in particular, Israel. “For new diplomats arriving to any country, there is an initial period of learning,” says Eldan. “They must learn about the society, political system, laws, and so on, to efficiently serve their homelands. This is a process that can take a great deal of time, and so we decided to initiate a program tailor-made for diplomats that would shorten that period of learning and give them the tools that would enable them to quickly understand the most crucial topics regarding Israel.”

As an academic program that grants a certificate upon its completion, participants are assured that they receive unbiased information that can help them in their analyses and decision-making.

“This is a crucial point,” says Mintz. “As an example, one of the participants in the program was the ambassador of Egypt. He told us in the first meeting that his father had been a military general, and that he had chosen to come to Israel to advance peace. And so it is vital that this man, and all of his colleagues, know that they are being provided with an objective assessment and analysis of Israel, without the involvement or intervention of any governmental agency.”

It is vital that participants know that they are being provided with an objective assessment and analysis of Israel, without the involvement of any governmental agency.

Prof. Alex Mintz Chair of the Program for Diplomats

Many of the participants have come to Israel with their views of the country shaped largely from watching and reading about Israel in the news, and the curriculum allows them to hear about and see the country from alternative views. As part of the course, they are taken on a whirlwind tour of Israel’s borders, and witness how small and vulnerable the country is.

In the five years since the program’s launch, some 80 diplomats from more than 40 countries have completed it, including ambassadors from Albania, Belgium, Cameroon, Canada, Colombia, Croatia, the Czech Republic, Egypt, El Salvador, Ghana, Kenya, the Philippines and Peru, as well as other diplomats, military attaches and air attaches from the United States and elsewhere. Topics covered in the program include: the Arab-Israeli peace process; the Israeli legal system; national security decision making; Israeli counter-terrorism; the past, present, and possible future of the Israeli economy; minorities in Israel; understanding the Israeli media, and archaeology in Israel.

According to Mintz, the program does more than provide a learning experience; it enables diplomats from various countries to bond with one another, as well as with Israel and I DC. Some of the ambassadors become so involved with IDC that they return as lecturers or – as with diplo-mats from the Czech Republic and Portugal – as students in IDC Herzliya’s M.A. program.

Eldan says he is very satisfied with the course’s success.

“It has been embraced by the diplomatic corps as a very useful program.” he says. “They especially appreciate the fact that it is conducted at an academic level, and at IDC in particular, which is very famous among diplomats for its activities, and which many ambassadors find to be a warm home for them while they are stationed in Israel.” 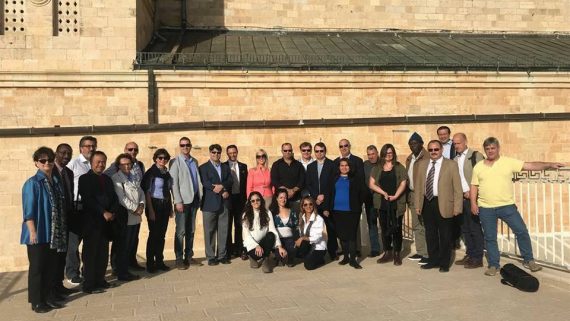 Tour to the Northern Bedouin Village

The Ambassadors’ Club of Israel is honored to attend the Annual Award Event, h…

Thank you, Dear AmbassadorHappy Birthday The Ambassadors’ Club of I…